Englewood’s Swirl’s N Curls Is a Favorite with Residents 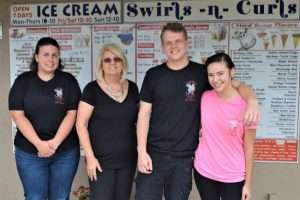 No one could ever accuse Marie Bronson of being lazy.

When she and her husband Tim bought a small commercial building as an investment in Englewood back in 2003, she probably never imagined that five years later, she would begin operating three separate businesses out of it.

“At that time, when we bought it, we had a builder in here,” Marie said. “But when 2008 came and he couldn’t pay the rent, I had to take over the building.”

When she and Tim were trying to decide what business to put in the vacant space, Marie came up with the idea of combining a few different ones. They already had a hair salon at Fiddler’s Green and an ice cream shop on Placida Road, but Marie is also a licensed real estate broker. They found that they were able to make space for all three businesses in the then vacant building.

That’s when the job of getting the word out to the Englewood community began.

“When we first opened Swirls N Curls here (the ice cream shop), we only made $10 for the whole day,” Marie said. “But we have found that the businesses all really help each other, because they have different busy seasons.”

In the Sunnybrook Blvd. location, along with Swirls N Curls, the Bronsons own Shear Sailing Hair & Tanning and Sunnybrook Realty. They’re truly family businesses, with the Bronsons’ daughter working in the hair salon and their grandson scooping ice cream in Swirls N Curls.

Marie said that the ice cream shop, in particular, has become a favorite with Englewood residents, winning Best of Englewood several times.

“We have a great product, which is the highest-grade ice cream available — we take no short cuts,” she said. “They’re made up of all the best ingredients.”

One of the ice cream shop’s most recent additions came about as the result of Marie’s chance meeting at a trade show with a gourmet popcorn and cotton candy maker. Using savory and sweet flavors like Italian cream cake and confetti popcorn as toppings and mix-ins, Swirls N Curls staff members can create all kinds of new taste sensations. And they use different flavors of cotton candy in floats and other ice cream treats, as well.

They’re also creative with other ingredients.

“One of the newest things for the summer has been the What-A-Melon, which is a watermelon rind with watermelon sorbet and chocolate chips for the seeds,” Marie said. “We’ve also been doing bubble waffles, which are homemade waffles, with scoops of ice cream and toppings.”

Swirls N Curls doesn’t have an inside seating area, but has a nice area out front with benches, a gazebo and a couple of putting greens, where customers can relax on a beautiful summer evening and enjoy their frozen goodies. They can even bring their pups, because the shop also sells homemade frozen doggie treats, made with bananas, peanut butter and yogurt.

Marie said she believes the wide variety of quality desserts is why her shop has become so popular with Englewood residents and snowbirds.

“Every week, we add something different to our menu to spice it up,” she said. “This is not your typical ice cream store.”

Subscribe to Shear Sailing e-news today to receive updates on what is new at our salon, special promotions and offers!
No Thanks